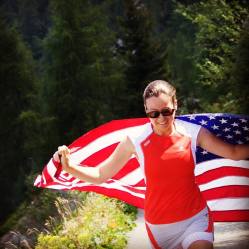 On August 8, 2015, Kathryn Lindquist became the first person in history to trace the route the 101st Airborne Division and US troops took during World War II. Run For Currahee took her 850 miles from Normandy, France to the Eagle’s Nest in Berchtesgaden, Germany.

She followed up her adventure by returning to France for a record-setting D-Day 100 Mile Honor Run from June 5 – 6, 2016, running solo from Pegasus Ridge to Utah Beach, in less than 24 hours.

She is an accomplished mountain and adventure runner based on the Western Slope of Colorado, currently training for the Leadville 100 and ultra distance events in the state.

Lindquist plans to use her success through Run For Currahee and other events to inspire others to be active in the outdoors and honor our veterans in everyday life.

She was sponsored throughout Run For Currahee by Skratch Labs, Ultimate Direction and locally by Oiselle. Her endeavors and mission to inspire women to be active outdoors led to her being selected as an official SisuGirls Champion. In 2016 she has been supported by Altra Running and Skratch Labs, once again, with the addition of Stoked Roasters coffeehouse and roastery.

Active in the military community, Lindquist enjoys guest speaking at various community events. In October 2015, she was the keynote speaker at the Currahee Military Weekend in Toccoa, Ga, where she spoke about her experiences during Run For Currahee. She has also been recognized by various government organizations including the 101st Airborne Division for her efforts to preserve the stories of our WWII veterans.

If interested in contacting Lindquist with inquiries for potential sponsorships or speaking arrangements, she can be reached through this website.

October 2017 – Commemoration of Run For Currahee and dedication to Veterans, Fort Campbell, Kentucky.

8 thoughts on “The Runner”